It's raining work.  Hallelujah!  And it's NEW work, work that I've not done so far.  Some of this work doesn't fit in the handy freelance-official-captioning box in which we like to categorize our steno work -- or categorize ourselves.

How is this happening?   Not because I'm special or lucky.   It's because I'm willing to change.

Comfort is fatal to one's career.

A rut is a grave with the ends not filled in yet.  The only thing constant is change.  The platitudes seen on cross-stitched pillows on Pinterest boards worldwide.

They're true!  No matter how successful you are NOW, if you don't think you need to change in order for your career to keep or increase its momentum, you're going to be disappointed.

I've done my share of depos, a few hearings and grand juries, and a lot of CART.  Last month (was it only last month?) I said YES to three jobs that I didn't envision myself doing when I passed my last 225 Q&A nearly two decades ago.  In short, last month I captioned three university commencement ceremonies, provided in-stadium captioning for several baseball games, and provided instant transcripts for a nationally syndicated political radio talk show.

That's key reason #1!  Stay open to new opportunities.  "No, I've never done that work."  For cryin' out loud, if you say that, you'll NEVER do that work! 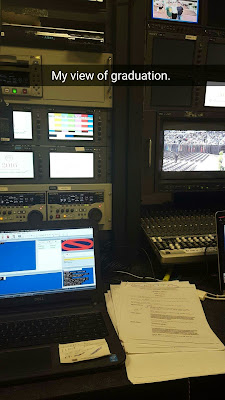 this year, so I upgraded my regular CAT software to the full captioning suite.  (Might I add, I completely changed software providers at this time, so I had an additional learning curve).  We captioners set up in the AV/media/tech room, next to the camera and sound operators.  I watched the ceremonies from the backstage monitors.  One of the tech staff set a camera to point at the Titantron or whatever the big stadium overhead is (I don't know what it's called.  In the WWE it's called the Titantron, so there you are) so I could see the actual captions. We did NOT caption each student's name as they walked across the stage.  Everyone has a program with the students listed, so they can follow along.  I did have scripts for the ceremonies, as well as some of the speeches that were made, which helped greatly.

That's key reason #2.  Be willing to upgrade your equipment.  That job can't be done by regular CAT software.

Let's talk about baseball.  I got offered the chance to provide in-stadium captioning for some of Wrigley Field's home games! No, I don't drive up to the friendly confines every once in a while -- it's done remotely at my coworking space in O'Fallon, Illinois.  My only internet service option at home is substandard, so I rented some space from a friend of mine who has his own office.  I've got my captioning going and my little mini-MLB Game Day window up so I can see how the game is progressing.  It's fun to be part of the show!  I grew up Cubs but have since moved to Cardinal Nation, so it's quite nostalgic for me to be rooting for the Cubs again.  I don't know who I'll cheer for when I caption a game that's Cubs v. Cardinals.  I'll just have to root for whichever team plays someone I have a crush on.

That's key reason #3.  Be willing to change your work setup and think outside the box.  If you've got to take major steps, but it will be worth it to do so, for heaven's sake, DO SO.

My next assignment came from an agency new to me, but I'd developed a friendship with the owner over the years and they know I got the chops, so they invited me to help with an ongoing assignment on an as-needed basis.  This agency provides instant-delivery transcripts for a daily national talk show, and they need another person to help out.  It's challenging, because it's wall-to-wall colloquy, multiple speakers, and they talk FAST.  When they have guests, they talk FASTER.   Every hour on the hour I send a rough draft to the show's staff, and at the end of the three hours I clean it up and send the final out.  What helps is that the show is on for 20 minutes, then there's a commercial break for a few minutes, then the show, then commercials, etc. so I do have some time to clean it up, but I need to write well and fast in order for it to work.

Key reason #4.  Keep improving your skills!  PRACTICE.   That work requires SPEED.  The me ten or even five years ago wouldn't have been able to handle this assignment.

Were these changes EASY?  Was I COMFORTABLE?  Absolutely not!  I stumbled!  I panicked at times!  Last month my stomach was tense more than it was calm!  Heck, at the time I'm writing this we're trying to figure out why I'm not able to connect through a modem, and isn't troubleshooting a big bucket of enthusiastic joy!

Comfort is fatal.
From out of the brain of Kathryn "Stenoray" Thomas, RDR, CRC at 9:26 AM 1 comment: