My motto is "Push the Pace."  A few months ago (maybe several, don't quite know) WWE's Monday Night RAW filmed their 1,000th episode in St. Louis.  I was happy to attend, as all--ALL--my major WWE crushes were there :oD

I knew I was going to need a new Testing Shirt for the Guinness attempt, so I'd been keeping my eyes peeled for the Perfect Shirt.  And then the Rock enters the arena, and he's wearing this shirt (click through to WWEshop.com):

I hope this link works. If not, go to shop.wwe.com and search under "Superstar," "Rock," and look at the T-shirt that has "Push the Pace" on the back.

I could see something on the back of the T-shirt, and once my eyes focused in on the text thereon, I went, "THAT'S THE ONE!!!!!" And my husband said, "WHAAAT?" because there were, like, a bazillion people cheering for the Rock and stuff.  I ordered that sonofagun the next day.

Weekly update: My CART schedule increased with a vengeance this week, plus I had to cover for someone in addition to my newly increased hours, so I actually did not get much practice in this week. Mind you, I'm NOT complaining. :o)

But this weekend I DID get all my 475 wpm practice sessions in, and I haven't felt much difference between practicing at 450 and practicing at 475. So it's time to -- what? -- Push the Pace.  I'll kick it up to 500 wpm here in a couple of weeks and see what happens.

And lastly, I just tested myself at 330, and it was MUCH improved from last week. Progress!

From out of the brain of Kathryn "Stenoray" Thomas, RDR, CRC at 1:04 PM No comments:

Email ThisBlogThis!Share to TwitterShare to FacebookShare to Pinterest
Labels: Boots 2 Asses, Push the Pace, speed practice, the crushes in attendance were the Rock- the Miz- Shawn Michaels- and Drew McIntyre, The Impossible Goal

Little inside voices like to suggest sometimes that it can't be done, you're not good enough, what's the use, only the Epic people should be going for it, why try if you ARE going to fail, etc. etc.  I'm doing my best to brush them off.  Thankfully I haven't ran into anybody who has been negative to me about my goal--but I've ran into plenty who have been positive to ME but negative to THEMSELVES. "Wonderful! Boy, I sure couldn't do that!"  (You're certainly NOT going to do that if you keep telling yourself you can't.) (Heck, I can't do that NOW. That's why I'm practicing. I ain't gonna get there by accident.*)

I tried a 330 wpm just now, and while I got it in places and did NOT drop, it was mostly pretty messy.  And that's quite a bit slower than 370.  Doesn't look good for me at first blush.

But it's been five months since the NCRA speed contest where I got 280 wpm, and now I'm possibly around 320 (allowing for the messiness of that last 330). That's an increase of 40 wpm. That means if I maintain the progress, in five months--June--I should be at 360, and then that's within spitting distance, right???

*I've run into several Muggles--non-steno folk--who have expressed amazement when I mention that I have to excuse myself to practice, or that I train every day.  "You mean you PRACTICE??"  Pete's sake, it's the WORLD RECORD. Just because you've taken a few violin lessons doesn't mean you can immediately rip into the Devil Went Down to Georgia.
From out of the brain of Kathryn "Stenoray" Thomas, RDR, CRC at 12:11 PM 1 comment:

I'm up to five practice sessions a day minimum -- doing a Q&A take sped up to approximately 450 wpm, three during the day, once before dinner, and once at around 9 pm.  School starts this week, but I've got a light schedule this semester, so that shouldn't cut into practice too much.

And believe it or not, there's starting to be short stretches -- and I do mean SHORT stretches -- where I'm not dropping quite as much, so probably here in a week or two I'm going to bump up the speed again.  I haven't tested myself yet to see where I'm at due to the whirlwind of the last month, but I'm feeling some progress.

If you're wondering what The Impossible Goal is, you can read about it here.
From out of the brain of Kathryn "Stenoray" Thomas, RDR, CRC at 11:27 AM No comments:

I'm too tired.
The fingernail on my final L finger ripped off below the quick, so it aches when I write.
I drank too much.
We had a busy day.
There was a death in the family.
When I put a pizza in the oven, I accidentally touched the heating element, and now I've got a blister on my initial P fingertip.
Doctor Who is on tonight.
I already shut down my computer.
I wrote on the job for 6 hours today. 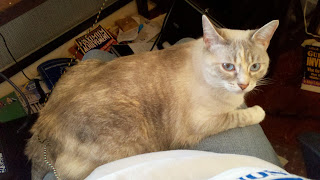 I just took the dogs out to potty, and they took their own sweet time finding JUST THE PERFECT SPOT, so now my fingers are frozen (even with gloves) and can't hardly move.
I don't like the subject material on the Magnum Steno video of the day, and since our ISP has data caps, I can't watch a different one.
I've got plenty of time before the Guinness attempt.