At the time I write this, it's Thursday night at a resort at the Lake of the Ozarks.   I'm providing CART for a conference. I can't say I've noticed much progress this week in PRACTICE...  but... I sure do notice it at work! 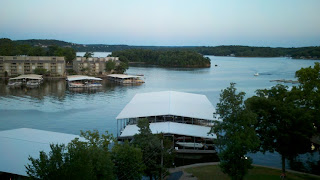 This is a combination of things.  Yes, I've been practicing literary at speeds at or above 300 words per minute, so that definitely made things seem slower than it would have, had I not been practicing this.  But in addition to that, I've been writing more and more words in fewer and fewer strokes.  Words that I used to write in two or three strokes I write in only one.  And I'm still learning more phrases.  If I can write two, three, or even four words in one stroke, I want that!

Plus I've been using DigitalCAT's briefs suggest window.  For my nonsteno friends, if you're writing something in two or more strokes, but your steno database has an entry for the same word that is one stroke, it'll tell you in a little window.  I don't use this for one-on-one CART, because I don't want the window to cover up any screen space nor do I want it distracting my consumer.

But I use it when I'm projecting CART, because I send the feed to a netbook, and hook the netbook to the projector.  That way I can add dictionary entries at the last minute, use the briefs suggest window, and I can adjust the projection display independent of my own viewing preferences.  (I don't normally use this two-notebook system with students, because I've found there's usually not enough time or space to set that up.)

So I have the ability to shorten my writing as I go, which is the key for me, I believe.  I've long suspected that my fingers have hit the ceiling when it comes to finger speed -- something I've discovered is wrong, as my fingers have gotten faster -- and therefore, shorter writing is how I'll attain more speed.  Shorter writing definitely was the order of the day here.

From out of the brain of Kathryn "Stenoray" Thomas, RDR, CRC at 1:36 PM